Most of informational widgets stack together in the right column.

Altitude widget shows the height above sea level of current geolocation. Android: on some devices altitude is not displayed correctly due to missing correction of Earth-geoid, you can download it via: Menu → Download maps → All Downloads → World maps → World altitude correction.

This widget shows current time from your device. 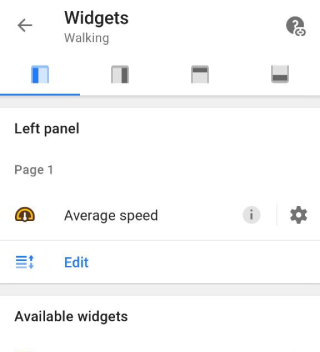 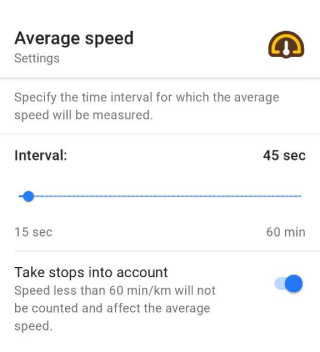 This widget shows battery level of your device.

The widget is shown at the top of the screen. It shows the geographic coordinates of:

The widget is shown at the top of the screen. It shows the geographic coordinates of current geo-location.

You can reset the current GPS-cache via:

GPS (Global Positioning System) info widget shows a number of satellites that device detects and uses at that moment. It could be used to check GPS-status in case of a bad GPS-signal.

Trip recording widgets refer to Trip recording plugin. You can use them to view brief information about the track recording on the screen. Such as Distance, Duration, Uphill and Downhill for the Android version and for iOS version only Distance/Start-Stop.

This is a Parking position plugin widget that shows distance from your screen center to the parking place.

This is a Mapillary plugin widget that provides quick access to Mapillary app to add Street-Level-Imagery.

This is a Audio/video notes plugin widget that provides quick access to start / stop taking a recording (audio / video or photo).

This is OsmAnd Tracker plugin widget is used to get quick access to OsmAnd Tracker app and share your location with other people. It shows whether connection is online or offline and if sharing location is enabled, then the time since last successful sending is dispalyed.

This is a Developer plugin widget to investigate how fast map & map elements are showed & refreshed. It displays:

Note: FPS doesn't reflect how quickly full offline map screen is rendered, there is another Developer plugin setting for it - Rendering debug info.